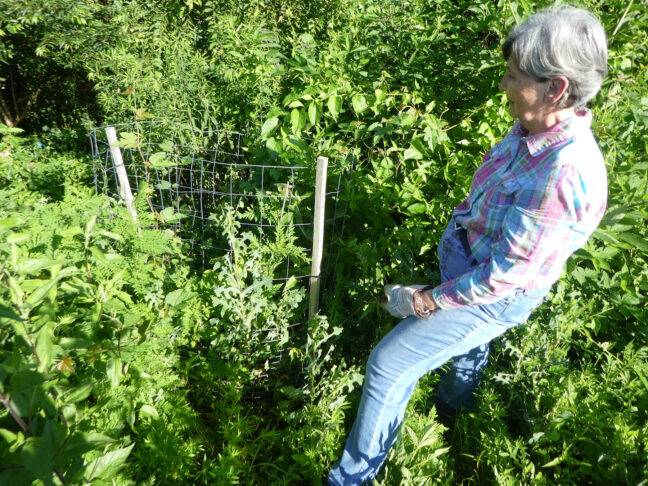 In mid-June, Tree Stewards continued an ongoing effort to restore the natural landscape at Charlottesville’s Jackson-Via Elementary School. Elise Burroughs and Kathy Nepote returned to the school grounds to remove weeds from around trees and shrubs CATS had planted earlier this spring. Eleven of our plantings were freed from encroaching vegetation, including invasives.

The Charlottesville Area Tree Stewards have taken advantage of the great spring weather and have pursued projects across the community.  In all of this work, our aim has been to improve both the health and the aesthetics of each site.

At Charlottesville’s Jackson-Via Elementary School, where we have been working for months to remove invasive vines and shrubs, we returned to the grounds on April 3 to plant trees in the places we have cleared. A few days later we were back at Jackson P. Burley Middle School on Rose Hill Drive to continue the removal of invasive vines and other vegetation that threaten trees on the campus, particularly along a creek adjacent to the school’s playing fields. The CATS team followed up with further work on April 26.

On April 23, our volunteers pruned trees that CATS had planted over the years for the Gateway Project, along the Route 20 entrance corridor into Charlottesville near the I-64 interchange. Later, on May 7, a small but valiant crew of CATS went back into Charlottesville’s Northeast Park to continue the removal of English ivy that is overwhelming the park’s trees.

May 9 found CATS at our tree nursery adjacent to the Virginia Department of Forestry, where we potted more than 200 one- and two-year-old trees for future sale to the public.  On May 19, CATS volunteers could be seen at the Ivy Creek Natural Area. Their mission: weed and mulch plantings our organization had put in place over the years around the Bird Viewing Area. On May 25, more weeding and mulching were in store for CATS working at Greenleaf Park, where we did some spring cleaning around beds of ferns we had placed there earlier.

Here’s a photo gallery of some of our recent projects.

As traffic whizzed by on Route 20, CATS pruned trees we had planted earlier for the Gateway Project.

CATS volunteers continued an ongoing effort to clear English ivy and other invasives from trees at Jackson Burley Middle School.

At our nursery adjacent to the Virginia Department of Forestry’s headquarters, a CATS crew potted more than 200 trees for future sale to the public.

At the Ivy Creek Natural Area, CATS volunteers cared for plantings and improved the view around the Bird-Viewing Area.

A CATS team spruced up fern beds and other plantings at Greenleaf Park. 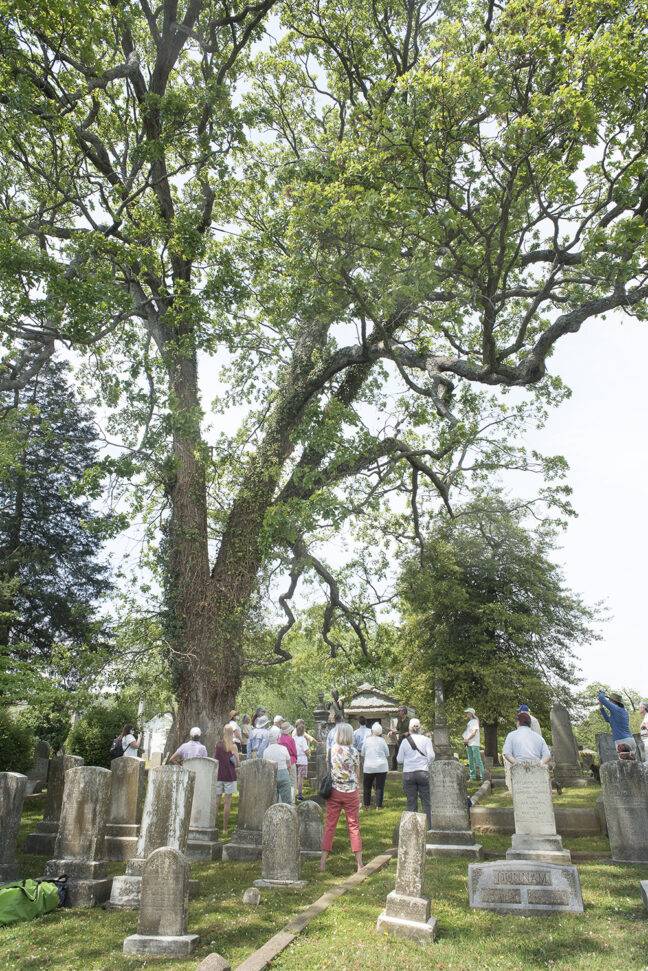 On the eve of National Arbor Day, the Charlottesville Area Tree Stewards designated the Post Oak at the historic Maplewood Cemetery as a Landmark Tree. This marks the 12th tree to receive this recognition as part of the CATS Notable Trees Project. The project celebrates exceptionally large and beautiful trees in the community that are in locations easy to find by the public. Standing near the corner of Lexington Avenue and Maple Street in downtown Charlottesville, the Landmark Post Oak towers over the weathered headstones and memorials in the walled cemetery. It was established as the city’s first public burial ground in 1827.

Robin Hanes, president-elect of CATS and founder of the Notable Trees Project, served as emcee of the event, which received front-page coverage in The Daily Progress. Among the speakers were Mark Ronayne, Charlottesville’s urban forester; Peggy Van Yahres, vice chair of the Charlottesville Tree Commission; and Tree Commission member Mark Rylander, who was among the CATS volunteers who recently worked to rescue the Landmark Tree from a heavy infestation of English ivy. CATS President Barbara White also was on hand and paid tribute to the vital role that such trees play in our community and its quality of life.

That morning, CATS leaders joined city and state officials at Charlottesville’s Walker School for an Arbor Day celebration. In addition to the reading of a city proclamation, the event included presentations by students on the beautiful and diverse array of trees on the school’s grounds. Molly O’Liddy of the Virginia Department of Forestry used the occasion to note that Charlottesville has once again earned designation as a Tree City USA—a 15-year run. For more details, take a look at this C-ville Quick Takes video. And check out this VDOF video from 2020 to learn more about Arbor Day and Virginia’s native trees.

On a related note, a recent article by Erika Howsare in C-Ville Weekly provides a guide to the six Notable Trees that City Council voted in April to add to those protected by Charlottesville’s Tree Conservation Ordinance. Among them is the landmark Post Oak at Maplewood Cemetery. You can find her story here.

National Arbor Day is held the last Friday in April, but the Charlottesville Tree Commission and CATS board decided to celebrate a day earlier this year because students at Walker School could not participate on Friday due to their Covid schedule.